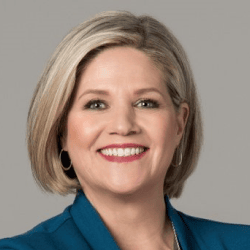 Andrea Horwath has been the leader of the NDP since 2009. She was a former City Councillor in the City of Hamilton

The NDP platform can be divided into three main pillars: Long-term care; climate change; and housing affordability. Traditionally, the NDP has appealed to progressive voters, union members and climate conscious voters. In the current election, the NDP is being challenged by the PCs for votes among union members and by the Green Party for votes among climate conscious voters. The 2022 election will be Andrea Horwath’s fourth provincial election. She is recognized as a strong campaigner and led the NDP to one of their strongest results in the 2018 election.

The NDP’s aim is to overhaul the current system and replace it with a public, non-profit system where every dollar invested goes directly to residents. The system will include more options for in-home care, allowing citizens to stay in their homes longer. A $1 billion investment will be made to create 50,000 new beds and eliminate the waiting list backlog. The new beds will be in smaller and more ‘homey’ long-term care facilities. As part of their long-term care plan, the NDP will pass their “Time to Care” Act to ensure each resident receives a minimum of four hours of care each day. The NDP’s plan ensures the new system will be staffed with well-paid and highly-trained employees who will work with family caregivers as partners in caring for elderly Ontarians.

The NDP is committed to a cleaner, more efficient economy, rooted in equity, affordability, and reconciliation. An “ambitious” government building retrofit program will aim to achieve net-zero emission on all government buildings and create 100,000 well-paying jobs initially, and one million over the life of the plan. An NDP government will scale up renewable energy sources, grid capacity, and connectivity with other provinces, placing conservation at the forefront of electricity planning. The NDP will re-evaluate existing fossil fuel subsidies and imports, particularly in respect to fracking.

It is expected that some of these funds will be redirected towards non-emitting energy sources such as renewable natural gas and second-generation biofuels. The party has stated that nuclear energy will not be a focus of theirs unless cost and waste storage issues are resolved. The NDP electric vehicle strategy will utilize sales targets and incentives for the purchase of zero emission vehicles, particularly those made in Canada, the construction of charging infrastructure. They have committed to all-electric fleets by 2040.  The NDP goal is first achieve emissions levels consistent with those in 2017, and the goal of zero emissions by 2030 using a carbon budgeting process. The NDP will also establish Ontario’s first ‘cleantech bank’ – funded by proceeds of cap-and-trade activities to support the adoption and transmission of products, services, and ideas that will help lower emissions. The party will ensure that large-scale industrial producers take responsibility for the waste they create and the banning of the use of single-use plastics for nonmedical uses.  The NDP has committed to the expansion of transit infrastructure, including inter-city GO transit, although it is unclear how much of that will consist of zero emission technology.

To protect Ontario’s water supply, the NDP will create a province-wide water inventory to track usage and the success of conservation efforts. Environmental protections will be introduced to preserve and expand Ontario’s green spaces and protect fresh water sources. In addition to environmental protections and emissions targets, the NDP climate plan is unique in that it also outlines plans for climate change resiliency to adapt to and mitigate the effects of the climate crisis. In places where flooding is becoming increasingly prevalent and dangerous, an NDP government will support people moving off flood plains and end construction in said areas. The party will also construct flood defenses in areas at risk of floods and insurance mechanisms for people affected by climate change fueled natural disasters. To protect Ontario’s forests, an NDP government will plant 1 billion trees by 2030 by partnering with non-profits, Indigenous groups, landowners, private businesses, and other levels of government. There will also be investment into forest and land management to mitigate the risks of forests fires. To ensure that the province is on-track regarding meeting climate goals, an NDP government would grant more power to the Environment Commissioner, giving them the power to conduct independent audits of Ontario’s progress.

With housing affordability at the forefront of election issues, the NDP’s plan serves to grant more security and control to renters and support for first-time homebuyers. Support for eligible first-time homebuyers will be in the form of a shared equity loan up to 10% of a home’s value. The NDP’s “Residents Rights” Act will allow residents to convert unused space into a rental space. The party will also clamp down on ‘renovictions’, where landlords can evict occupying tenants in order to raise rent and find a new tenant. The NDP will also regulate short-term rental prices, implementing rent control policies and eliminating vacancy decontrol, and providing direct assistance to 311,000 homes. Updated land use planning rules and a reformed home warranty system in Ontario will help foster an environment where co-op housing can thrive.

The NDP has set a goal to end chronic homelessness in Ontario in the next 10 years, using a housing-first strategy and making homes more affordable. An NDP government will invest an average of $90 million annually into expanding the life of 260,000 homes and an average of $340 million annually into constructing 69,000 new affordable homes over the course of 10 years. In addition to investment for building homes, $300 million will be dedicated to rent subsidies, co-op seed funds, and supportive housing spaces for vulnerable individuals. The NDP will also introduce an Indigenous housing strategy to address the housing shortages in Northern Ontario.

The NDP will increase the non-resident speculation tax from 15 to 20% and expand its application to all of Ontario. An NDP government would support municipalities in the process of shifting property taxes onto the very rich.