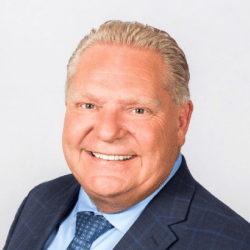 Doug Ford has been the Premier of Ontario since 2018 having received 40.5% of votes

Doug Ford is often described as an effective communicator who is populist by nature. He has a background as a small business owner, having worked at his family’s packaging and labeling company, as a Toronto City Councillor. From his time at Toronto City Hall and his original campaign to become Premier, Doug Ford has focused on government finances and the impact on the average taxpayer’s pocketbook. The COVID-19 pandemic radically changed Doug Ford’s original legislative agenda, hindering some initiatives, while advancing others. His handling of the pandemic and plans for Ontario’s economic recovery will play key roles in the upcoming election

“Building Back Better” is expected to play a large role in Premier Ford’s re-election campaign, with a focus on ramping up the manufacture and promotion of Made-in-Ontario products. He has pledged to build more highways connecting municipalities and to increase the housing supply to make housing more affordable and attainable. These pledges are supported by moves to bring more people into the skilled trades, including making it easier for qualified workers from other jurisdictions to work in their profession in Ontario.

The release of Ontario’s Housing Affordability Task Force Report in early 2021 has made it clear housing affordability will be a key issue in the upcoming election. With the ambitious goal of increasing Ontario’s housing supply by 1.5 million in 10 years, this is an issue that will be prominent in the lead up to the election, as there is a need to increase the housing supply to accommodate Ontario’s growing population.